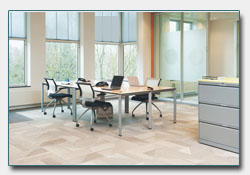 In our work here at TBI, we spend most of our time helping organizations plan, implement, and maintain large, strategic, and complex initiatives. However, sometimes big things can come in simple packages. I was having lunch with a friend last week and the discussion got around to work spaces and how they can impact productivity and motivation, whether in an office environment, manufacturing environment, or somewhere in between. Her employer, a large professional services firm, had recently expanded its work space, and her group had been moved to a different work space. She reported that she was amazed at how much better and more productive the entire work situation had become.

Before the move, the work group had been crammed into a too-small space which was also near a door, by a walkway, near a printer/copier workspace. Each person had a cubicle that had been made as private as possible; but the cubicles were small, the atmosphere was noisy, interruptions were frequent, and there is no disputing that walking through there could make you claustrophobic.

After the move, my friend marveled at how much better productivity and morale are. The group was no longer housed in a loud, heavy-traffic area. Each person now had workspaces in which they could actually get their jobs done and have the materials they needed.

This double benefit — increased productivity and employee satisfaction — should be no surprise. Herzberg taught us about motivation at work and the role of the physical environment. Not only does the work environment play a role in productivity and morale in business office or research environments, it plays a role in manufacturing workplaces as well.

In various improvement projects over the years in manufacturing environments, I learned how quickly productivity improved by getting the work space cleaned up and more orderly. In one location, we had a long-term plan of implementing long-term, cross-functional process improvement teams. To set the stage for the later initiative, we put together short term, temporary “blitz teams” to improve the physical environment. Within weeks, not only had productivity improved, but also morale. Why?

If you’re serious about improving productivity and morale and you’re looking for things to do that can help you progress quickly, improving the work space is a good place to start in your longer-term productivity improvement initiatives.